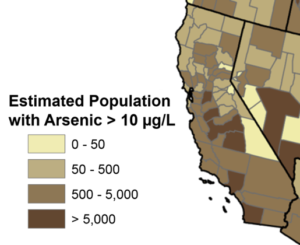 In the United States, millions of people lack reliable access to safe drinking water, a problem that is particularly acute in low-income rural areas. California legally recognized the human right to water in 2012, but this right remains unevenly realized. To better understand the status of the human right to water in rural communities, we analyzed 20 years of publicly available drinking water quality monitoring and violation data from 2001-2021, with a focus on arsenic contamination (a carcinogenic heavy metal) from a state prison as well as public water systems in three neighboring rural communities in southern California. We found that all four of these drinking water systems repeatedly exceeded the legal limit for arsenic during the study period, with mean served arsenic levels ranging from 3.4 (SD=6.7) to 9.3 (SD:=2.9) μg/L across the systems (based on 2,426 samples from four systems). In addition to arsenic-specific findings and comparisons across these four sites, our analyses demonstrate how publicly reported annually averaged water quality data (used to monitor system violations and to track progress toward the human right to water) provide only a partial guide to whether the right to safe water is being realized. We published our findings in 2022.